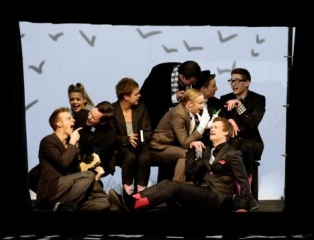 April 13 and 15, 6 pm:
International Music Festival «Sugrįžimai» («Comebacks»), various Vilnius venues;
In a bid to make gifted young people who chose music studies abroad come back, the Lithuanian Musician Support Fund is wrapping up the annual International Music Festival «Sugrįžimai».
This year, the festival is held for the 17th time.
April 14:
New Opera Action Festival, various Vilnius venues;
The operas of the New Opera Action Festival (NOA), in traditional thinking, is said to break the genre conventions and do not fit its limitations.
The present festival will initiate discourse about contemporary opera, without attempting to draw a “formula” for it or a description. The sixth NOA Festival is said to be about the numerous concepts of this genre, possibilities and prospects, about the past and present, and about what unites various arts and sensations.
April 15, 7pm:
Youth Symphony Orchestra of Germany salutes Lithuania; Lithuanian National Philharmonic (Aušros Vartų st. 5, Vilnius)
Programme features Bela Bartok (Concerto for violin and orchestra No. 2, Sz.112), Richard Strauss, (Tanz der sieben Schleier (Dance of the Seven Veils) from the opera Salome, Franz Schubert (Symphony No. 8 in B minor, Unfinished, D.759).
Musical life of Germany is said to be incomplete without the National Youth Symphony Orchestra of Germany. Established in 1969, it has become one of the leading youth orchestras in the world. Its concert tours encompass Europe, Republic of South, South America and China. The Orchestra involves 14–19-year-olds from around Germany. Many ex-members of the Orchestra have joined various prestigious orchestras, and also pursued successful solo careers.
The podium will be graced by Karl-Heinz Steffens, a seasoned maestro collaborating with various German orchestras as well as Radio France Philharmonic, Birmingham Philharmonic, the Netherlands Philharmonic, Helsinki, London, Tokyo and other orchestras. He also led the opera productions in Berlin and Moscow theatres as well as Milan’s La Scala.
Saluting Lithuania on the occasion of the 25th anniversary of the re-establishment of Lithuanian Independence, the National Youth Symphony Orchestra of Germany also is celebrating the 25th anniversary of the reunification of Germany.
April 12, 15, 7pm
The Seagull (in Lithuanian), OKT/Vilnius City Theatre (Ašmenos st. 8, Vilnius)
The play features a score of brilliant new-generation actors like Airida Gintautaitė, Dainius Gavenonis, Darius Gumauskas, Darius Meškauskas, Gelminė Glemžaitė, Giedrius Savickas, Kirilas Glušajevas, Martynas Nedzinskas, Nelė Savičenko, Rasa Samuolytė andVytautas Anužis.
The Seagull was born in the laboratory space of the OKT studio. The Lower Depths and Krapp’s Last Tape were staged and Hamlet and Miranda took their first steps in this open, intimate, unadorned, authentic space. The director sees a very close relationship between The Seagull, which is still in the making, and Hamlet and The Lower Depths that are already running.
«This is a great play to experiment. From the very beginning, it was doomed for explorations. With The Seagull we continue exploring the themes also present in Hamlet and The Lower Depths, those of the contemporary theatre, the contemporary actor, and the contemporary viewer. The Seagull is the third part of the triptych. All of these parts are joined together by a special focus on the actors. In The Seagull we seem to seek the impression that the audience is included in the story. Such interactivity is not autotelic – already fifteen years ago, our theatre formulated one of its main mottos, i.e. to stage classics as contemporary plays, making them an interpersonal experience rather than a historical digression. Therefore, we seek the viewer’s involvement in the creative process of the play,» says Osvaldas Koršunovas, the theatre director.
April 14-17:
Italian Culture Week (Vytautas Magumn University’s Humanitarian Studies Faculty (K. Donelaicio st. 52, Kaunas)
April 16, 7pm
(Not) only Girls in Jazz; Concert Hall «Piano Lt» (Trakų st. 9 / Kėdainių g. 1 (entrace from Kėdainių st.), Vilnius)
The atmosphere of jazz, American musical, parties and flirting girls fascinated two guys, who, one evening were strolling down mysterious streets of New York city and popped into a bar. They say that in such way a fascinating musical history of four people started which is going to be revealed in the evening of April 16 during a stylish concert, given by singers Nelė Kovalenkaitė and Vaidrius Smilinskas, clarinettist Viktoras Kusas and piano player Akvilė Šileikaitė.
April 16, 6.30 pm
Musical «How to make fortune in business without big trouble? »; Klaipeda State Musical Theatre (Danes st. 19, Klaipeda)
A two-part hilarious, star-studded musical; music and scrip authir Frank Loesser, book authors Abe Burrows, Jack Weinstock and Willie Gilbert.
April 17, 7pm
75th Anniversary Concert of Vilnius University Academical Mixed Choir «Gaudeamus» (Church of Sts. Johns
Šv. Jono st. 12, Vilnius)
Vilnius University academic mixed choir «Gaudeamus» is eagerly looking for April 17th, when it will deliver the biggest concert of this season – Vilnius University academic mixed choir will be celebrating its 75th Anniversary.
The best musical pieces of our repertoire are expected to be performed.
April 17, 10pm
Festival «Klaipeda goes massive» (Kiwi Club-Fabric, J. Janonio st. 27, Klaipeda)
All the best – music, DJs, performances – are to be combined into a great one-night festival in the happening night club in the Lithuanian seaport;
April 13-19:
Three centuries of fashion, Museum of Applied Arts, Arsenalo st. 3A, Vilnius;
The King of France Louis XIV quipped that fashion was a «mirror of history». This description of fashion as a unique social and artistic expression has not aged in over three centuries. Through his new exhibition spanning the period from the 1740s to 1960s, Alexandre Vassiliev attempts to answer the question, what drives men and women to constantly change their attire and accessories throughout history?
April 19, noon
Flea Market (Šermukšnių st. 4A, Vilnius)
In the Flea market all kinds of personal used things- from clothes, accessories, household utilities, interior details to toys, books and many others- can be found. Also here one can find unique handmade articles. The traders of the flea market usually do not seek profit and the visitors come to watch the things and to communicate, to have a great time and to acquire original items.