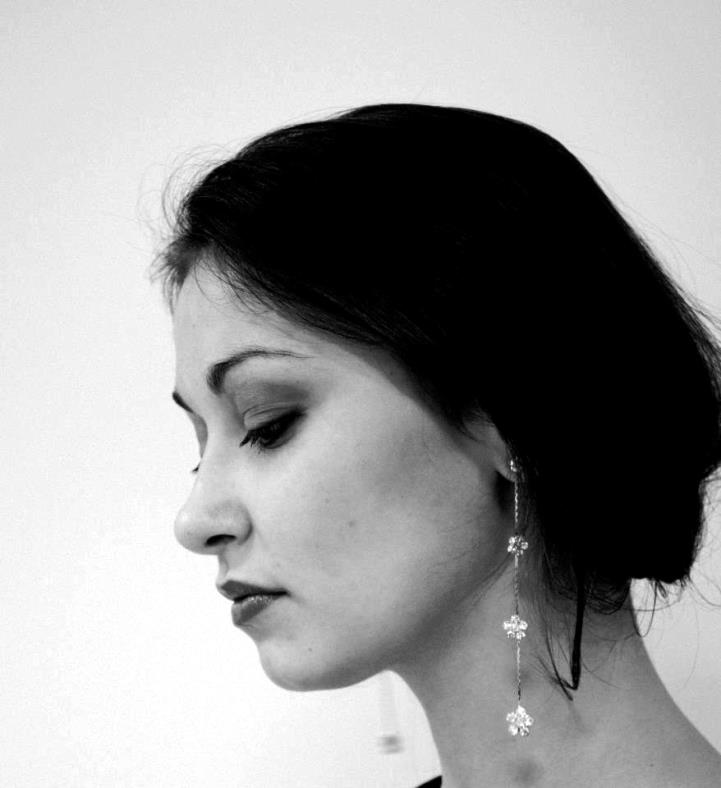 Like a pure and rapid stream falls into deep sea, so the creative work of the young singer Vera Talerko is growing stronger owing to her bright talent fortified by her hard work and striving for perfection. Her swift musical memory, pure intonation, the beautiful timbre of her voice with its individuality, the wide diapason as well as the attractiveness and artistic gift of the singer attract attention and leave a strong impression on her listeners and viewers. She remains in people’s memory!

Vera felt that singing was her mission already as a child when she was singing songs in the kindergarten with certainty and precise intonation. Since the age of four she was making solo performances in the vocal-instrumental group “Daugaviņa” (conducted by A. Rudz) as well as in music school and the trio “Lastauki” (conducted by T. Pimenova). Her performance made a bright occasion at each concert.  After successful completion of learning at Daugavpils music school(Latvia) in the class of choir (led by V. Drobishevskaya), Vera made her final choice of profession and entered the vocal department, the class of the professionally experienced teacher and singer Regina Petkevich. Along with academic singing, Vera learned at the department of music theory (led by E. Daugulis). These were years of her creative formation because, apart from learning in college and general education school, she made concert tours participating in diverse musical competitions becoming a laureate and winner of grand prix several times. The geography of her tours grew wider, from national to international, and in them Vera Talerko gained priceless experience of working on the stage and with the audience. On 2016th Vera Talerko finished her Master studies in the Music and Theatre Academy in Vilnius (Lithuania) in the class of opera singing (led by professor Asta Kriksciunaite). Improving her mastery in the academy, Vera continues active concert life in Lithuania, Latvia, Belarus, Germany, Austria, Spain, etc. The singer never misses an opportunity to take a master-class with experienced European vocal pedagogues, such as Violetta Urmana (Lithuania), Adven Harry (the Royal Academy of UK), Gerda van Celm (Holland), Angela Goba (Latvia), Irina Dolzhenko (Russia), etc. Participation in international events also brings benefit (European Liedforum 2012 in Germany, ReStart 2013 in Latvia, European Liedforum 2013 in Lithuania, ReStart 2014 in Latvia, Muzikālais Aprīlis 2014 in Latvia, International festival “Sugryzimai” in Lithuania), Nord Opera 2015 (Vilnius), Nord Opera 2015 (Helsinki). She is fast to imbibe the needed advice and brings it to practice. Her individuality saturated by the wide range of her feelings in music has attracted attention of the director G. Sheduikis and the conductor R. Shumila during the casting for new creative projects in Vilnius Opera “Bohemians”. During her studies Vera Talerko successfully practiced and improved her vocal skills in Vilnius City Opera and in Baltic Chamber Opera, she earned prizes in different international competitions (Vinces Jonuskaites Zaunienes konkursas 2015 (Vilnius, I place), Paula-Salomon-Lindmann-das Lied-Wettbewerb (Berlin, II place), Yantarnij Solovej (Kaliningrad, III place, prize for artistry)). From August 2016 Vera Talerko is an intern in Norwegian National Opera and Ballet (Den Norske Opera and Ballett) in Oslo where she has an opportunity to work with well known masters like Rinaldo Alessandrini, Jo Strømgren, Antonino Fogliani, Karl-Heinz Steffens etc. In Oslo National Opera and Ballet Vera did such roles like Amore (Orfeo ed Euridice, Gluck), Lola (Cavalleria Rusticala, Mascagni),  Frasquita (Carmen, Bizet), Marzelline (Fidelio, Bethoven) and Musetta (La Boheme, Puccini). In the end of season 2017 Vera Talerko beautifully sang a soprano part in Carl Orff's Carmina Burana with Lithuanian National Symphony Orchestra and right after Vera successfully took a part in Rossini festival in Bad Wildbad (Germany) where she sang part of Berenice in opera L'Occasione fa il ladro (conductor Antonino Fogliani, director Jochen Schonleber) and also won an internaional prize of this festival with invitation to sing there in 2018th year.